3D Printing is a process of transformation of a digital 2D file into a three-dimensional solid object. It allows less usage of materials employed in conventional printing. There is 3D modeling software available, such as Tinkercad, which is a free open source software that gets installed directly to the browser, to build your 3D model, along with several slicing software to carry out the slicing of the 3D model into hundreds or thousands of horizontal layers. 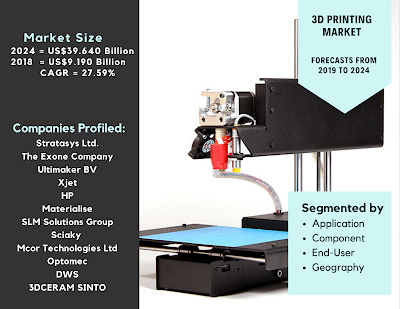 The 3D printing market size is anticipated to reach US$39.640billion by 2024. The 3D printing market has been segmented by components, technology, end-user, and geography. By component, the segments are categorized as hardware, software (CAD Tools, Slicers, Others), services, and material (metals, plastic, ceramics, others). By technology, the categories are vat photo-polymerization (stereolithography, digital light processing, continuous digital light processing), metal extrusion, material jetting, binder jetting, direct energy deposition, powder bed deposition (multi-jet fusion, selective laser sintering, direct metal sintering, electron beam melting), and sheet lamination. The end-user segment has been divided into healthcare, automotive, aerospace and defense, construction, and others. By geography, the segmentation has been done as North America, South America, Europe, The Middle East and Africa, and the Asia-Pacific region. The American region is projected to expand at a high CAGR over the forecast period due to high investments by major players in this region.
As of now, the application of 3D printing market under the category of semiconductors is prominently in industries but it is expected to become a production technology soon for other sectors as well. Some of the products that can be developed using 3D printing are consumer products like eyewear, dental products, prosthetics, movie props, and ancient artifact replicas.

Major market developments for the year 2020 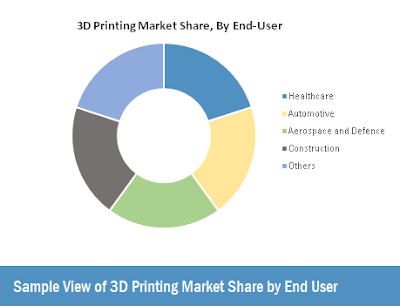 Applications of this market