Industrial Robotics market is projected to grow from US$45.762 billion in 2019 to US$66.841 billion in 2025, at a CAGR of 6.52% during the forecast period. The industrial robotics market is growing due to the high adoption of automation solutions across end-user industries. Rising labor costs and stringent regulations regarding workers' safety is driving the industrial robotics market. Robotics applied in industries helps in making the manufacturing and packaging more efficient by ensuring the quality of the products, preventing defective products or damaged products from entering the market, checking product safety,  and tracing the products. Manufacturers are influenced to use industrial robotics because of the pressure of delivering and maximizing production in limited time.  The industry is getting robotics for reducing time and money like by using laser cutting, laser welding applications, sensor technology, and robotics arms for production.

The demand for industrial robotics solutions is majorly affected by the surging usage of industrial robotics for tasks such as sheet handling and welding in heavy industries which help in a reduction in manufacturing cycle time and raw material wastage, thereby positively impacting the demand for industrial robotics solutions. Increase advancement in software technology, force/torque sensors, and end-efforts is making manufacturers heavily automate these tasks using robots as they save money and complete the task in lesser time. Robots are usually controlled by humans. It provides more ease in programming for a novice user and is far more affordable than non-collaborative robots. Collaborative robots are designed to provide safety so that there is no risk of injuries and damages. Robotics are majorly used in the automotive industry but are nowadays being used heavily in other industries like the electronic industry as there is more requirement for customization which can be done by robots in an affordable way reducing cost and increasing profit margin. Industrial Robotics Market Size gradually increases by many folds in the coming years across the world due to its rising applications across all the sectors of the market. 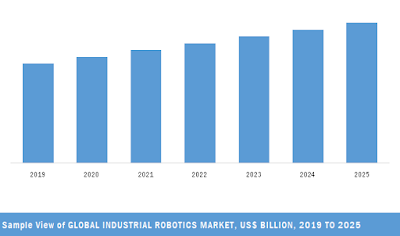 
The Industrial Robotics market is segmented by type as cylindrical, SCARA, articulated, Cartesian, and others. Segmentation on the basis of component is by Controller, Robotic Arm, Drive Sensors, and others. Cylindrical robots are used in spot welding, assembly operation, handling at machine tools, and handling at diecasting machines. Placing and picking work is done by a Cartesian robot it is used in assembly operations, handling machine tools, application of sealant, and arc welding. Scara robots do have a similar application like a Cartesian robot. An articulated robot has at least three rotary joints and is helpful in controlling the tasks performed in the production process. The robotic arm is programmable and functions similar to a human arm. It is forecasted that robotics arms a major share in the industrial robotics market in the forecast period as they are widely used in different industry verticals owing to their structural and operational capabilities. 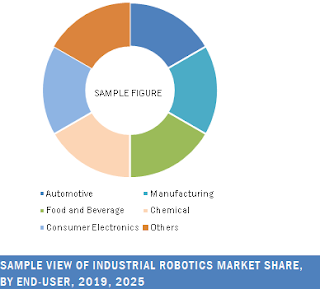 Segmentation by end-user is by automotive, manufacturing, food and beverage, chemical, consumer electronics, and others. The automation industry to be the largest end-user of industrial robotics due to the widespread utilization of robotics in manufacturing purposes in the assembly line and other manufacturing processes. It is used as it helps in improving quality and reduces warranty costs provides safety to workers and saves them from performing hazardous and difficult jobs. The food and beverage industry to witness growth in usage of the industrial robotics industry due to the rising demand for processed food and beverage products, especially in developing countries. Robot helps in preventing contamination of food and increasing efficiency in high output rate. Consumer electronics to see the fastest growth due to swelling demand for efficient electronic products, miniaturization of electrical and electronic equipment and the growing complexity of the manufacturing processes.
Industrial Robotics Market analysis by geography

Regionally the industrial robotics market is classified into North America, South America, Europe, the Middle East, and Africa, and the Asia Pacific. North America is expected to lead the market due to increasing modern manufacturing facilities for the production of higher quality products at a faster speed ata lower cost. The high use of intelligent software and hardware in the production industry is also a driving factor for the industrial robotics market.  Asia Pacific to be the fastest-growing region because of rapid growth in demand robotics in the automation sector. Especially in China as it is the largest automotive industry in the world. Increasing manufacturing activities in emerging economies such as China and India coupled with favorable government initiatives will further propel the market growth in the coming years.