Overview
Del Monte Pacific Limited, cultivates, grows, produces, distributes and markets canned food products including a variety of fruits and vegetables as well as several tomatoes based canned products. DEL MONTE PACIFIC LIMITED has a multiple brand that operate under the company’s umbrella that sells canned food products, these brands are named as follows Contadina, S&W and Del Monte. Del Monte Pacific Limited is a subsidiary of Nutri-Asia Inc.
Product:
Canned food market solution by the company is canned vegetables, fruits, and tomatoes 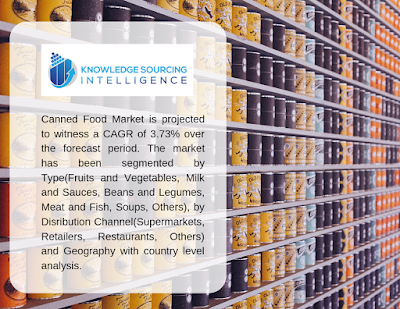 Overview
DOLE PACKAGED FOODS, LLC, operating under the ITOCHU Corporation. The company is involved in producing, packaging, marketing and distributing canned and packaged fruit products, these fruit products include shelf stable fruits, frozen fruits, dried fruits as well as fruit juices. The company was acquired by the Japan based company ITOCHU Corporation in 2012.
Product:
Canned food market solution by the company is Canned Fruit, and Canned Juice

Overview
Bush Brothers & Company was founded in 1908 by A.J. Bush. It is a family owned private corporation and is one of the leading manufacturers and distributors of baked beans in the United States of America. The company is currently operating under the leadership of Jim Ethier the chairman of Bush Brothers & Company.
Product:
Canned food market solution by the company is Baked Beans, Grillin Beans, and Organic Beans.

B&G Foods, Inc. was founded in 1889 by the Bloch and Guggenheimer families, hence, the name of the brand B&G. The company was established by selling pickles in Manhattan, New York, and today remarkably has over 50 brands under its control, from 1997 to 2018 the company has acquired over 20 companies growing its net sales from $129 million to $1.7 billion. With over 125 years of experience of conducting business under its belt, the company has over 2000 employees working for it. B&G Foods Inc. is a public company and is listed under the New York Stock Exchange (NYSE). The company and its subsidiaries are involved in producing, manufacturing and distributing food products in the United States, Canada as well as Puerto Rico.
Product:
Canned food market solution by the company is branded under B&M, Don Pepino, and Joan of Arc brands

Overview
Headquartered in Camden, New Jersey, the Campbell Soup Company is a global level food company with annual sales of approximately $8 billion. The company is involved in making various packaged food products under an assorted group of brands it owns. The company is a public company and is listed under the New York Stock Exchange.
Product:
Canned food market solution by the company is  canned soups, broths, and entrees