Drivers and restraints of 3d mapping and modeling market

The growing technological advancement in 3D devices like 3D scanner and 3D sensors owing to the rise in R&D funding has led to the improvement in the 3D mapping and modeling process which, in turn, is augmenting the market growth. Other factors including the rise in 3D content coupled with the growing demand for 3D models in the media and entertainment industry are increasing the 3D mapping and modeling market size. The growing purchasing power of consumers is driving the demand for 3D-enabled and 3D-supporting devices like smartphones, tablets, and other mobile devices further spurring up the demand for the 3D mapping and modeling solutions. Aging population and increase in chronic diseases patients escalate the demand for such solutions in the healthcare industry as the technology assists in the surgical process by mapping human anatomy. However, the need for high initial investment will hamper the market growth during the forecast period. Expanding 3D mapping and modeling applications in various industries such as healthcare, entertainment, automotive, retail, construction aerospace, and manufacturing among others is expected to propel its demand over the projected period. 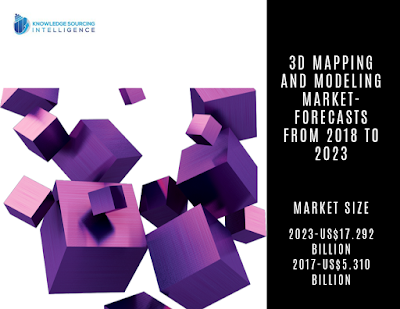 By industry, global 3D mapping and modeling market is segmented as healthcare, aerospace and defense, media and entertainment, retail, construction, automotive, manufacturing, and others. The construction industry accounted for the largest market share, in terms of value, in 2017, followed by media and entertainment. The dominance of the construction industry is majorly attributed to the rising use of 3D maps and models for visualizing construction models and sites before initiating the construction process. Expanding urbanization, rising pressure on existing infrastructure, and environmental concerns are driving the convergence of geospatial and 3D technologies across the industry. Per the International Energy Agency (IEA), there will be spending of around $45 trillion for mitigating the effects of climate change over the next 40 years. The construction of smart cities in developing countries will require 3D scanners with intelligent data models and data integration tools to model and design these cities efficiently. Technological advancements are further driving the use of 3D mapping and modeling in the construction industry. The growing use of drones to manage, measure, and communicate site progress will bolster the 3D mapping and modeling market growth in the coming years.

Geographically, global 3D mapping and modeling market is segmented into North America, South America, Europe, Middle East and Africa, and Asia Pacific regions. North America accounted for the largest market share of the global 3D mapping and modeling market share due to the early adoption of technology by various end-use industries in the region. The presence of a large number of global players coupled with a high investment in R&D will drive the demand for 3D mapping and modeling solutions in the region till the end of the forecast period. European 3D Mapping and the Modelling market will also witness a considerable growth between 2017 and 2023 owing to a booming automotive industry in the region that uses the technology for the assembly line and the prototype. Autodesk software for digital manufacturing designs and manufactures cars and equipment with tools created for automotive manufacturers and suppliers.
EMEA market for 3D mapping and modeling will also witness significant growth between 2017 and 2023. Recently in February 2017, Israeli startup Pixtier has designed a software program that can automatically transform a series of 2D aerial photos taken by drones into accurate 3D digital maps which, then can be used in urban planning, homeland security, reality tours, and even autonomous vehicles.
However, APAC is projected to witness the fastest regional market growth during the forecast period. The growing construction industry and booming infrastructural development in emerging economies such as China and India will drive the demand for 3D mapping and modeling solutions. The construction of Yinchuan as the most high-tech smart city in China will provide great potential for 3D mapping and modeling solution providers to gain a larger market share. Likewise, India’s Smart City Plan coupled with increased FDI and high investment by the government in this project will further drive the market growth in the coming years.
According to industry research conducted by Knowledge Sourcing Intelligence, major industry players profiled as part of the report are MAXON Computer, Autodesk Inc., The Foundry Visionmongers, and Apple Inc. among others.
Key Questions Answered in This Report:
·         What are the key regions having a significant market share of the market?
·         What are the drivers and restraints of the market?
·         Who are the key market players in the market?
·         Who are the end-users of the market?
·         What is market segmentation of 3D mapping and modeling market?