Plants are attacked by various microbes out of which many become harmless on account of resistances employed by the plants. However, often this resistance is late or in a lesser amount than required. Plant activators are chemicals that activate plant defense genes against pathogens. They activate the defense genes in plants by providing signals mediated by salicylic acid. They have minimal or no effect on the human body or environment as they don’t contain any pesticide. Plant activators don’t attack pathogens or pests by themselves, they simply induce a self-defense mechanism in plants so that they can defend themselves against an attack also since they don’t interact directly with the pathogens, therefore, plant pathogens develop are unable to develop resistance to these chemicals.

Growing global food insecurity due to the burgeoning population is putting pressure on limited arable land available. As a result, the demand for plant activators is significantly rising in order to increase crop production and eliminate food insecurity worldwide. Increasing attacks of pest results in the decrease of the crop yield and extensive use of chemical pesticides and fungicides affect the consumer's health as well as deteriorate the quality of the soil. The plant activator's market size is increasing as they are an alternative to pesticides and fungicides. Moreover, they increase long-term agricultural productivity and restore soil balance. The rapid adoption of advanced and modern farming practices coupled with favorable government policies is also contributing to the growth of plant activators market. 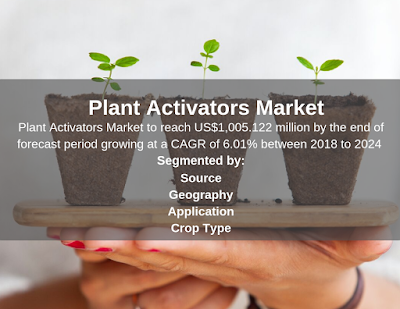