Mirrorless cameras, also known as mirrorless interchangeable lens cameras (MILC) refers to a camera that uses a single removable lens and employs a digital display system instead of an optical viewfinder. Mirrorless cameras utilize an image sensor to display an image acting as an electronic viewfinder. On comparison with DSLR, these cameras are relatively lighter, smaller, and convenient for portability. The market of mirrorless cameras has been segmented on the basis of type, distribution channel, and geography. 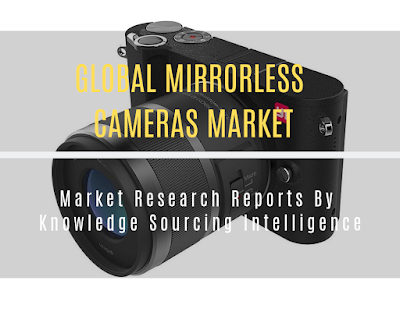 Growing disposable income of the urban population coupled with increasing social media trend is driving the market for mirrorless cameras. The retail sector has become more organized and growing at a rapid pace. The growing e-commerce industry is expected to increase the global global mirrorless camera market size. E-commerce sector is focusing on meeting the last customer which is increasing the market of the mirrorless camera. Consistent new product launches with attractive and new features by the key players are also uplifting the market. Decreasing the overall cost of production of these cameras is also augmenting the growth.

Availability of substitutes is hampering the growth of the market. The market is getting tough competition from both smartphones as well as DSLR camera. However, research and development to decrease the cost of production and attractive new features offered by the vendor are expected to boost the mirrorless camera market growth.

Are smartphones a threat to the market?

Smartphones are getting popular these days and they are offering premium quality cameras with features similar to mirrorless cameras or DSLR. The increasing trend of social networking has led to the growth of cameras in the smartphone industry. However, mirrorless camera market trend is expected to be positive. The market is growing slowly but steadily among the financially sound population due to its better quality of pictures. The rise in disposable income has also led to the growth of the market.