Intestinal problems such as fecal incontinence and constipation among adults are becoming very common these days on account of rapid change in lifestyles and unhealthy dietary habits. Rise in population and dietary imbalance are also a cause of intestinal issues. With technology advancements in the medical and healthcare segment, these intestinal problems are being dealt and managed with the help of bowel management systems. Irrigation systems, colostomy bags, and nerve modulation devices (NMD) are the devices used in bowel management systems. These devices are used in hospitals as well as for home care purposes. 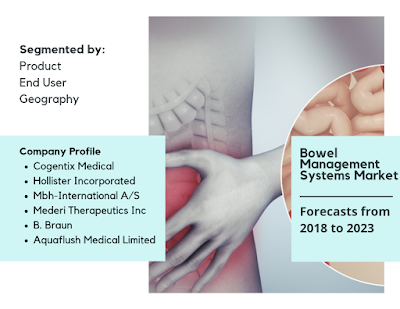 Drivers and restraints of the Bowel Management System Market

The market for Bowel Management Systems is witnessing steady growth on account of the rapidly growing geriatric population worldwide. According to the International Foundation of Gastrointestinal Disorder (IFFGD) around 10-15% of the global population has Irritable bowel syndrome (IBS). Moreover, favorable reimbursement scenario in the developed economies along with the technological advancement in the bowel management systems are further contributing to the bowel management systems market growth. Rapid change in lifestyles and unhealthy dietary habits are also contributing to the increasing bowel management system market size. However, concerns regarding the discomfort associated with the use of bowel management devices and patient’s preference towards noninvasive clinical methods are expected to hinder the market growth.