The source measure unit (SMUs) devices are instruments that are capable of sourcing voltage while simultaneously measuring the current. These devices are highly accurate, gives high resolution and measurement flexibility. On the basis of product type, the market of source measure unit devices can be segmented into source measure unit devices. SMUs have various applications in many end-users such as Automotive, IT & Telecommunication, Aerospace & Defense, and Healthcare. However, they are majorly employed in applications of semiconductor devices, precision electronics. SMUs are employed for testing a huge range of discrete components due to ease of programming, flexibility in the expansion, and wide coverage of measuring signal levels. SMUs eliminates the need for developing complex synchronization and connection using multiple instruments thereby reduces the cost. 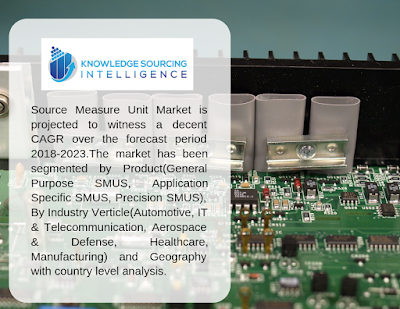 The demand for electronic testing equipment is increasing across its end-users such as automotive, IT & telecommunication, aerospace & defense, and healthcare which is boosting the source measure units market growth. The demand for SMUs is increasing due as it supports faster testing with improved accuracy than traditional means. Its market is flourishing as it eliminates the need for developing complex synchronization and connection using multiple instruments and helps in cost-cutting. SMUs have a high level of integration capabilities and they are flexible with different electronic devices that are uplifting its market. Technological advancements and automation in process industries have increased the demand for higher accuracy and better performance of electronic devices, parts, and equipment which is further boosting the market.

Sometimes SMUs overshoot the current and it also losses its accuracy due to the radio-frequency electromagnetic fields. These are major challenges to the market. Also, source measure units take a longer time to respond which is restraining its market growth. However, source measure units market size is expected to grow on account of increasing investments to make hybrid vehicles. Increasing demand and adaptation of such vehicles will boost the market of source measure units in the coming future. Also, the 5G launch has opened new avenues for the growth of the market on account of increasing requirements of testing mobile phones.