Global genetic testing market is growing with an attractive CAGR 13.17% over the forecast period(2018-2024). Genetic testing is the process of carrying out a range of tests on the sample of DNA derived from blood, saliva, skin, and other tissues. Genetic tests are majorly conducted for diagnosing genetic disorders, identifying the mutation in the gene, and designing the treatment package. The growing prevalence of genetic disorders has been instrumental in driving the market. 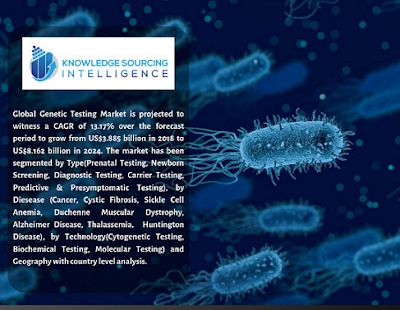 Genetic testing is used for providing information about an individual’s genes and chromosomes. It is used for several purposes ranging from diagnostic testing to predictive testing. The demand for genetic testing is growing on account of the increasing prevalence of genetic diseases globally. For instance, the estimated incidences of down syndrome, a type of mental retardation caused by extra genetic material in the chromosome, is between 1 in1,000 to 1 in 1,100 live births globally. In fact, in the United States, the prevalence of down syndrome increased from 9 per 10,000 live births in 1979 to 11.8 per 10,000 live births in 2003 according to the Center for Disease Control and Prevention. The number of patients reported for cystic fibrosis, a genetic disorder that affects the respiratory, digestive, and reproductive system has increased from 6,609 in 2005 to 18,999 in 2009 in Europe according to the European Cystic Fibrosis Society. Similar positive trends have been witnessed for other genetic diseases globally. The growing prevalence of genetic diseases is increasing the use of a genetic testing mechanism for early detection as well as designing the proper treatment for the patients.

By Geography, the genetic testing market has been segmented as North America, South America, Europe, Middle East and Africa, and Asia Pacific. North America held a major market share in 2018. The regional market is further segmented as United States, Canada, Mexico, and Others. The growth in the region is attributed to the rising patient base and the presence of highly developed healthcare infrastructure in the region. Asia Pacific will witness significant growth on account of the rising government initiatives in the field of genetic testing in countries such as China, Japan, and India.

The genetic testing market in Brazil is projected to grow at a CAGR of XX% during the forecast period to reach US$XX.XX billion in 2024 from US$XX.XX billion in 2018. Brazil is the eighth largest economy in the world; however, it is still recovering from the recent recessions in 2015 and 2016. The recent structural reforms introduced have put the economy on a path of recovery by slowing down the government spending and reducing the barriers to foreign investment. The majority of the population is served by the public Unified Health System and only a small portion of the overall healthcare spending is covered by the insurance.