By vipin - August 19, 2019
The Global solar rooftop market is projected to grow at a CAGR of 18.36% during the forecast period, to reach a market size of US$100.246 billion by 2024, from US$36.458 billion in 2018. This growth is driven by the widespread adoption of renewable energy for power generation in which solar energy plays a vital role. Furthermore, the increasing deployment of the bi-directional metering system along with remote monitoring systems for solar rooftop generation is significantly increasing the efficiency of the distributed generation. In addition, the increasing prices of utilities are further anticipated to increase the adoption of rooftop solar in the residential sector. 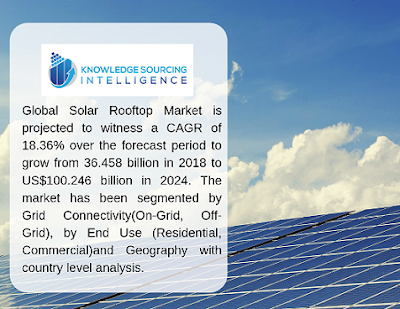 The global solar rooftop market is expected to have a substantial growth on account of the increasing prices of utilities worldwide. The growing demand for electricity due to rapid urbanization and industrialization in major emerging economies is further driving the demand for electricity which in turn is leading towards more burning of fossil fuels and thus utility prices are increasing.
Furthermore, the growing adoption of solar rooftop panels for electricity generation on account of the cheaper and best the alternative of electricity generation is further expected to anticipate the demand for solar rooftop panels during the forecast period. For instance, in Rosario, Argentina, the population is moving toward use of solar water heaters to meet the energy needs sustainability, approximately all new buildings and upgraded public buildings are installed with solar water heaters which further reduces their cost for heating the water by approximately 80% in comparison with conventional water heaters. Moreover, increasing tariff rates on electricity due to high maintenance and development costs of the grids on an account of overburden and heavy requirements of electricity further increases the price and thus both commercial and the residential sectors are moving towards alternate methods for electricity generation in which solar energy plays a vital role. 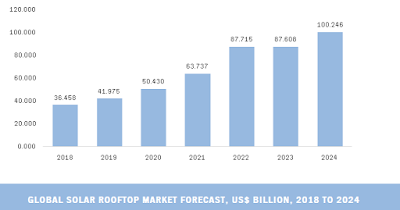 Geographically, global solar rooftop market is segmented as North America, South America, Europe, Middle East and Africa, and Asia Pacific. APAC accounted for the largest market share in 2018 owing to the high rooftop solar installations in countries like China, India, and Australia. Continuous steps and initiatives taken by governments in these countries is further boosting the growth of the solar rooftop market in the APAC region. North America held the second position on account of supportive government policies to support the adoption of solar energy at both residential and commercial level. 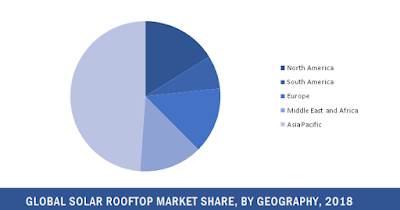 The demand for global solar rooftop will witness a growth in North America on an account of growing focus towards sustainable development and increasing dependence on clean energy in the region. The market for solar rooftop in North America is projected to grow at a CAGR of 18.23% and reach a market size of US$16.090 billion in 2024 from US$ 5.890 billion in 2018. Furthermore, funding schemes by the government and increased spending for the promotion of clean energy is further expected to increase the adoption of solar rooftop systems in the region and thus driving the demand for solar rooftop panels during the forecast period.

For All Industry Reports
Request Free Sample Or Download Report