The global mixed signal IC market is growing with an attractive CAGR during the forecast period(2018-2024). A mixed signal integrated chip is one that integrates a number of IC designs such as digital circuits, analog, memory, and radio frequency in a single chip.
The miniaturization of the electronic devices is leading to more complex designing that requires several functionalities to be deployed on a single chip, which is boosting the mixed signal IC market. The demand for such design is increasingly gaining traction in the market owing to its burgeoning use across industries such as consumer electronics, automotive, communication and technology, and healthcare among others.

Internet of Things (IoT) is one of those technologies that is set to become ubiquitous in almost every industry. The affordability of sensor technology is playing an important role in the burgeoning adoption of IoT across industries. Its penetration in industries is leading to more complexity at the circuit level that requires an integration of a number of designs on a single chip, thus boosting the demand for mixed signal applications. Since, mixed signal applications are gaining traction in the market owing to their utilization in a number of applications such as auto-pilot cars, electronic devices, home automation, and others, the demand for mixed signal IC is poised to grow in the upcoming years. In the automotive sector, IoT has gained adoption in several areas such as in-vehicle infotainment, predictive maintenance, security, surveillance, and safety, and cognitive insights for management among others which has significantly driven the need for more sophisticated electronic control units, therefore augmenting the market growth.

Global Mixed Signal IC Market By Geography
Geographically, the mixed signal IC market is segmented as North America, South America, Europe, Middle East and Africa, and the Asia Pacific. These regional markets have been further segmented into countries. The Asia Pacific holds the largest market share and is expected to continue dominating the segment throughout the projected period. The growth of the market in this region is attributed to the rapid growth of the consumer electronics industry. North America and Europe also hold a significantly large share in this market. The market growth in these regions is being driven by the inflow of huge investments into industries like communication and technology, automotive and healthcare among others. The regional market in South America and the Middle East and Africa is expected to witness a moderate growth which will be contributed to by investments into these regions by major players across major end users industries of mixed signal ICs. 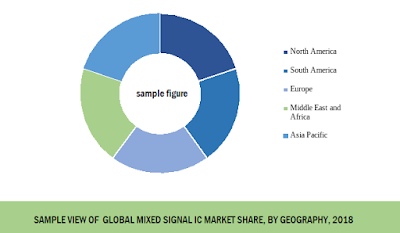 ASIA Pacific
The Asia Pacific mixed signal IC market was valued at US$XX.XX billion in 2018 and is expected to grow at a CAGR of XX% over the forecast period to reach a total market size of US$XX.XX billion by 2024. The market growth in this region is being fueled by the rapid growth of industries like consumer electronics and automotive in countries like China and Japan. These two economies, being among the largest industrial hubs in this region, account for the lion’s share in this market. Availability of cheap and skilled workforce and other resources for the growth of industries is attracting investments by many companies who seek to leverage the growth potential this region holds by setting up production sites here. As these investments continue to stream in and industries showing significantly high adoption of mixed signal ICs continue to grow, the demand for these ICs will continue to grow, thus augmenting the growth of the market.
For All Industry Report
Request Free Sample or Download Report
global mixed signal IC market size
For Semiconductor Industry Coverage
global mixed signal IC market analysis