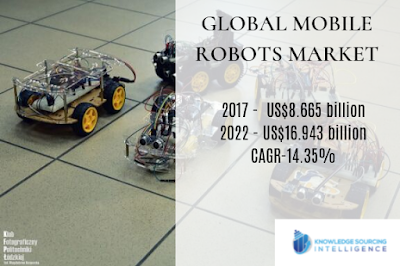 The development of industries such as automotive, food and beverage, oil and gas, construction and buildings, and healthcare among others combined with rising investment by vendors drives the adoption of industrial automation solutions. The growing focus of players on achieving energy efficiency owing to strict regulations and rising need for energy conservation further propels the demand for industrial automation. Other factors including advancement in the industrial internet, growth in IoT technologies coupled with government initiatives and continuous technological advancement augments the industrial automation while driving the mobile robots market growth. Integrating mobile robots with automation improves an organization’s material handling and space utilization capability and reduces wastage. Furthermore, the continuous introduction of innovative mobile robots for industries augments the adoption of a mobile robot by automated industries. For instance, Omron, in January 2016, introduced an industrial mobile robot which provides a high level of efficiency and cost savings. The industrial automation is expected to grow substantially in developing economies like China, South Korea and India owing to increasing investments by enterprises operating across various industries.

Geographically, the global mobile robots market is segmented as Americas, Europe Middle East and Africa, and Asia Pacific. Americas accounted for the largest market share in 2016 due to the early adoption of technology by various end-use industries in the region. The presence of a large number of global players coupled with high investment in R&D will drive the demand for mobile robots in the region till the end of the forecast period. European mobile robots market will also witness a considerable growth between 2017 and 2022 owing to the shift to mobile robots for automation processes in lieu of human workforce due to rising labor costs in the region. 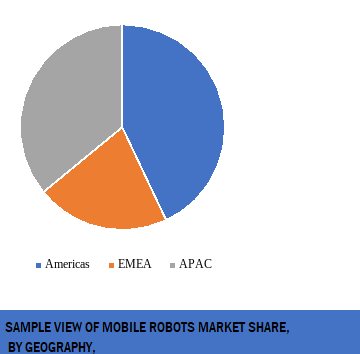 However, APAC is projected to witness the fastest regional market growth during the forecast period. Rising manufacturing and industrial activities in countries such as Japan, China, and India along with favorable government legislatures and initiatives is attracting global mobile robots market players to expand their product and service offerings in this region. Initiatives such as Make in India and Made in China 2025 is boosting the automotive and other industrial sectors, leading to the growing integration of robotics technology across APAC countries. Moreover, the defense sector in the region is escalating the demand for drones. The growing e-commerce industry in emerging APAC economies is further fuelling the demand for mobile robots for the warehousing and logistics industry, thus, positively influencing the overall market.
For All Industry Report
Request Free Sample or Download Report
global mobile robots market size
For Automation Industry Coverage
global mobile robots market analysis