By vipin - July 24, 2019
By the end of 2024, the global market size for the cardiac implant devices market is projected to grow with a CAGR of 4.30 percent to reach USD40.300 billion from USD31.300 billion in 2018. The growing burden of cardiovascular diseases worldwide along with growing health expenditure are the major drivers driving the growth of the global cardiac implant devices market during the forecast period. Additionally, the growing geriatric population is further propelling the market growth owing to the growing age-associated cardiac diseases, thus, creating the demand for the cardiac implant devices during the forecast period. 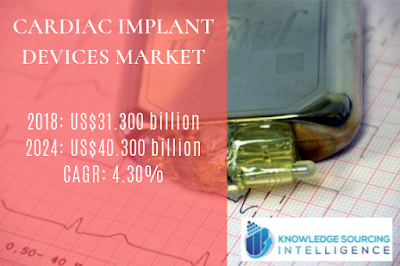 Moreover, technological advancements will provide an opportunity for the market to thrive in the upcoming years owing to the growing number of clinical trials worldwide. Geographically, North America is expected to hold the largest market share of the global cardiac implant devices market owing to the highest health expenditure of the United States and a high prevalence of the cardiovascular disease.

An increasing number of deaths from abnormal heartbeats is driving the demand for pacemakers, as pacemakers optimize the heartbeats and control the heartbeats, thus providing signification reduction in the risk of strokes. Furthermore, increasing expenditure by the key market players to bring out the state-of-art technology is further expected to anticipate the demand for these pacemakers. In Europe, scientists are continuously working for the development of battery-less pacemakers, which will work from the energy generated by the heart and which is being currently run on the testing phase. Simultaneously, increasing cardiovascular diseases in the European region is another prime factor to propel the market demand for the pacemakers in this region, thus, fueling the growth of the cardiac implant devices market during the forecast period. As per The World Health Organization, cardiovascular disease is the reason for more than half of the deaths across the European Region. In addition to this in United Kingdom pacemaker implantation is one of the most common types of heart surgery that is carried out in which thousands of pacemakers are fitted each year (Source: National Health Service). 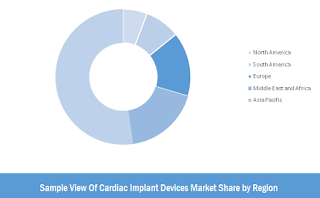 North America and Europe together hold a significantly large share in this market. The growth of the in these regions is majorly attributed to state-of-the-art healthcare infrastructure which is expected to continue improving as industry players continue to funnel in huge investments in this sector in these regions. The cardiac implant devices market in Asia Pacific is being driven by supportive initiatives by some governments in order to make expensive healthcare services accessible for people of all income groups. Middle East and Africa, and South America are also expected to show good growth over the projected period.
For All Industry Report
Request Free Sample or Download Report
cardiac implant devices market size
For HealthCare Industry Coverage
cardiac implant devices market share