The usage-based insurance market is projected to grow at a decent CAGR during the theforecst period(2019-2024).the high dependence and availability on traditional insurance premiums are projected to restrain the market growth in the near future. Additionally, the cost of installation and privacy concerns are also poised to confine the growth of the UBI market to a certain extent in the coming years. 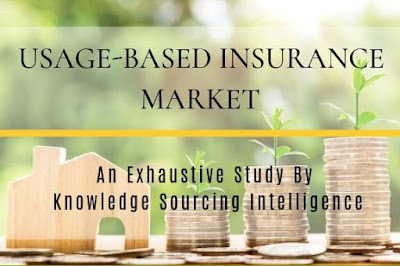 Smartphones are projected to hold a substantial share in the UBI market and are projected to grow at a very good CAGR on account of the increasing development of smartphone app-based UBI policies, and its ease of installation and usage to the insurer. Commercial Vehicles are also projected to hold a substantial share in the coming years owing to the high usage of telematics in order to monitor the fleets and to counter the high premiums associated with the automotive insurance of commercial vehicles.

By technology, the usage-based insurance market is segmented as OBD-II, smartphone, embedded system, black box, and hybrid. The telematics technologies generally used by the insurance companies are either plugged into the onboard diagnostics (OBD-II) port of an automobile or are integrated into the vehicle by the manufacturer. In 2018, non-embedded or hardware devices such as OBD-II dongle, black box, and smartphones dominated the market due to their ease of use. With minimal cost associated with dongles and smartphones, the technologies held a major chunk of the market share in the year 2018. 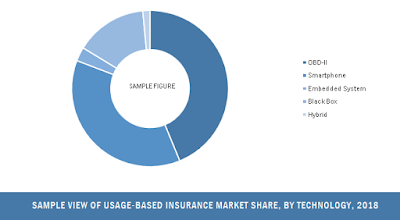 Smartphones are expected to grow at the fastest rate due to the consumer’s willingness to opt for smartphone-based UBI insurance product in countries like USA, UK, and China. Insurance providers are expanding their base in Asian countries with the smartphone-based UBI products in order to lure customers. However, in the long run, the embedded and hybrid technologies are expected to grow at a good rate and have a significant share in the market due to burgeoning adoption of connected vehicles in both developed and developing regions.

The usage-based insurance market for OBD-II is projected to grow at a CAGR of XX.XX%, rising from US$XX.XX million in 2018 to reach US$XX.XX million in 2024. OBD-II refers to the second generation of the onboard diagnostics interface built into vehicle computers. The technology is playing an important role in usage-based telematics insurance and it held a major share, i.e., 43.80% in the market in the year 2018. Highly secured data provided by the device at a relatively low cost is one of the major factors that is driving the demand for OBD devices for telematics. The technology is utilized in the form of a dongle, provided by the insurer, that is self-installed by the driver through the vehicular OBD port.

The dongle receives and stores vehicular data through this connection and is configured to receive global positioning system (GPS) data. Till 2016, OBD-based solutions are the most preferred solution in the United States and other North American markets since they are low cost and reliable. Manufacturers such as I.D. Systems, Intelligent Mechatronic Systems (IMS) are the key players that are providing OBD device to the insurance companies. In April 2016, IMS announced an upgrade to its DriveSync platform that supports Bluetooth-based OBD device support in order to provide insurers with the richness of OBD data while leveraging the policyholder’s smartphone for connectivity. Thus, the market is expected to grow at a substantial rate over the forecast period on account of its ability to work in conjunction with some other technology to provide precise vehicular data.