The global seed market is projected to witness a CAGR of 7.04% during the forecast period to reach a total market size of US$108.059 billion by 2023, increasing from US$71.851 billion in 2017. Growing global population coupled with expanding urbanization is putting pressure on natural resources. 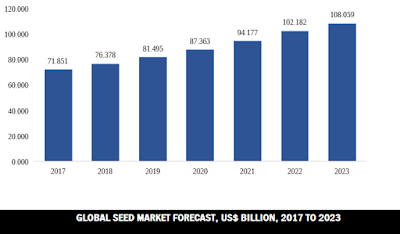 This is impacting the global food security concern which, in turn, is driving the demand for seeds, both conventional and hybrid. Rise in crop losses due to pest attacks and natural calamities is augmenting the demand for GM seeds which is further boosting the growth of the global seed market. Key market players in global seed market include Monsanto, now DuPont, Groupe Limagrain, Bayer AG, KWS SAAT SE, ChemChina, Land O’Lakes, Inc., Sakata Seed Corporation, Takii & Co., Ltd., and DLF.

The global food security challenge is the major driver of the global seed market. Factors such as the growing global population, changing tastes and preferences, climatic changes, and increasing water scarcity worldwide are leading to a rise in global food insecurity. According to the new global report on the food crisis, around 108 million people in the world were severely food insecure in 2016. 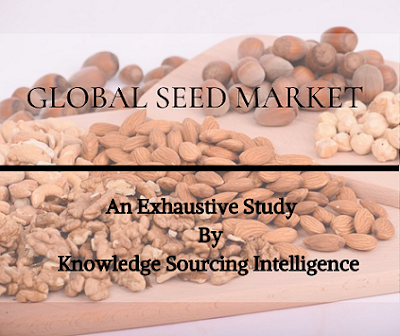 Growing global population is also leading to expanding urbanization which, in turn, is leading to a decline in the amount of arable land in the world. Given the limited scope for expanding agricultural land and water resources, the agricultural sector is required to improve productivity with efficient resource-use in order to meet the rising food demand. According to the United Nations, the global population is projected to reach 9 billion by 2050, and agricultural production will tend to increase by 50-70% by that year. In order to make all regions in the world food secured, there is a rising demand for hybrid seeds in order to raise productivity.

Geographically, the global seed market is segmented as North America, South America, Europe, the Middle East and Africa, and the Asia Pacific. These regions are further segmented in countries which are important seed markets. North America dominated the global seed market in 2016 with around XX% of total market share due to the presence of major market players coupled with high investment in the development of GM and hybrid seeds in the region. South America will witness considerable market growth during the projected period owing to rising food exports from Brazil and Argentina. APAC, however, will grow at the highest CAGR between 2018 and 2023 owing to growing population base and high concerns for combating food insecurity in countries like China and India. Increasing cases of pest attacks and changing climatic conditions will fuel the demand for stacked-trait, high-yielding seeds which will foster the seed market growth in the region during the next five years. 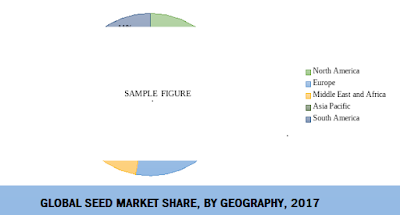 North America Seed market is projected to dominate the global market till the end of the forecast period, growing from US$XX billion in 2017 to US$XX billion in 2023. It is further segmented into major countries such as the U.S., Canada, Mexico, and others which are important seed markets within the region. Mature breakfast cereal market and high consumption of meat and eggs in the region is one of the major factors for the growth of seeds market in the region for both human consumption and animal feed.
Request Free Sample or Download Report
global seed market size
For Agriculture Industry Coverage
global seed industry analysis