Head mounted display (HMD) market is projected to grow at a  decent CAGR  over the forecast period(2018-2023).The continuous rise in demand for head mounted display is attributed to its increasing adoption for various purposes across different industry verticals. Application base is continuously expanding due to rising demand for lightweight HMDs. 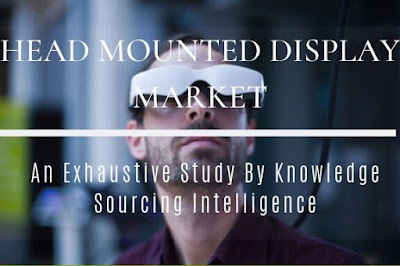 Falling prices of microdisplays, coupled with rising demand from defense services is also boosting the growth of the market. Due to coming up of light wearable technology and rising consumer demand for HMDs, many large players like Intel, Google and Vuzix are entering the HMD market which will further boost the growth of the industry worldwide. Manufacturers are trying to tap the low-cost HMD consumer market, especially in emerging economies as the prices of microdisplays are falling substantially.

Falling prices of microdisplays is one of the major drivers of global head mounted display market as it lowers the overall price of the device for the ultimate users. Owing to the growing number of sensor suppliers all over the world coupled with advancements in technology, there is an intense market competition in the sensors industry which has resulted in the low prices of microdisplays. Moreover, rising demand for Internet of Things (IoT) applications and other high-volume applications have driven down the prices of sensors. Thus, prices of microdisplays which use various microsensors are plummeting, thereby leading to the growth of HMD market. Silicon and Indium are the two primary raw materials in the manufacture of displays. The prices of these two raw materials had been lowering down from the past few years. According to the United States Geological Survey, Mineral Commodity Summaries, the prices of Indium per one kilogram was US$ 540 in 2012, reduced to US$ 340 in 2016, dropping at a CAGR of 10.92%. Whereas, the prices of Silicon metal fell from US$ 127 in 2012 to US$ 91 in 2016, losing at a CAGR of 8%.
The drop in the prices of Silicon and Indium has facilitated the rise of the Head Mounted Displays market in the forecast period.

Geographically, head mounted display market has been segmented as Americas, Europe Middle East and Africa, and Asia Pacific. This region is further segmented into countries which are important markets for HMDs. The below-depicted pie chart shows the regional market share for the year 2016: Americas accounted for over XX% of global HMD market share in 2015 owing to the presence of major players of HMD market in the region. 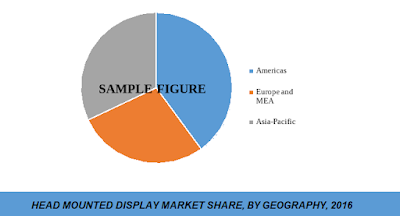 Moreover, rising gaming population demanding for Xbox and PlayStations coupled with an emerging trend of virtualization is, in turn, fueling the demand for HMDs. Early adoption of the technology by various end-use industries in developed countries like the U.S. and Canada are bolstering the growth of HMD market. APAC region is projected to witness the fastest regional market growth at the highest CAGR of X.XX% during the forecast period. This is due to the establishment of manufacturing units in countries such as South Korea and Japan along with the technological advancement in the region. The region is experiencing high market growth majorly from the healthcare sector due to increasing demand for complex surgeries.