The occupancy sensors market was growing with a decent CAGR during the forecast period(2017-2023). An occupancy sensor is an indoor motion detecting device which is used to detect the presence of a person to automatically control lights, temperature and ventilation systems. Rapid urbanization and rising awareness related to energy conservation are the major factors that are boosting the demand for occupancy sensors. 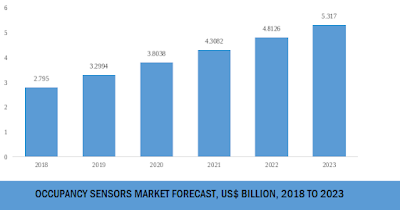 Occupancy sensors are increasingly deployed in various commercial and industrial areas as they not only provide security at home or office but also help in reducing energy use in unoccupied spaces.

Occupancy sensors are increasingly finding their use in a number of commercial and industrial areas as they provide security and help industries to use resources such as electricity judiciously. Energy conservation is the main driving factor that has encouraged end-users to increase their usage which in turn has a positive influence over the occupancy sensors market growth. The growing need for smart buildings will further fuel the occupancy sensors market growth. For instance, the Board of European Investment Bank (EIB) has approved the creation of a brand new financial instrument, the Smart Finance for smart buildings. This new instrument, together with other European Union policy initiatives for smart buildings, aims to unlock a total of €10 billion in public and private funds between 2018 and 2020 for energy-efficient projects for residential buildings.

Geographically, the occupancy sensors market is segmented as Americas, Europe Middle East and Africa, and Asia-Pacific. Americas accounted for a significant market share in 2017 owing to the mature end-use industries in the region. APAC will witness the fastest regional market growth during the forecast period owing to the growing demand for HVAC systems and the emerging smart home industry in countries like China and India. The global market player ABB has recently launched the ABB i-bus KNX PEONIA sensor that monitors and responds to changes in temperature, light, and air quality. 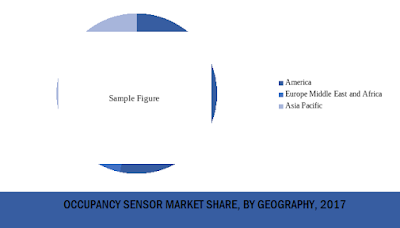 China is ABB’s second-largest market for smart building products after Germany. Rising investments, both public and private, in the construction of high-class residential as well as commercial buildings will further continue to boost the demand for occupancy sensors in this region. The presence of major manufacturers of end-use products such as Philips and other smart home device manufacturers also contributes to the growth of APAC Occupancy Sensor market.

North America occupancy sensor Market is projected to grow at a CAGR of XX% during the forecast period, reaching a total market size of US$XX.XX billion in 2023 from US$XX.XX billion in 2017. The region is further segmented into countries which are major markets for occupancy sensor manufacturers. U.S. holds the major market share while Canada and Mexico will witness a substantial CAGR during the projected period. The rise in the Mexican automotive industry supported by increasing investments by global automakers will drive the country’s occupancy sensor demand during the forecast period. Canadian Occupancy Sensor market will be driven by high use across residential and commercial buildings for energy-efficiency.