By vipin - June 10, 2019
The Cloud Infrastructure as a Service (IaaS) market was valued at US$75.517 billion in 2017 and is projected to expand at a CAGR of 9.70% over the forecast period to reach US$131.620 billion by 2023. Cloud infrastructure as a Service (IaaS) is a form of cloud computing that provides virtualized computing resources over the internet. It is gaining traction owing to the rising adoption of IaaS among enterprises of various sizes as it provides an easy, faster and cost-efficient solution to operating a workload without any need to buy, manage and support the underlying infrastructure. It is an effective model as it allows IaaS customers to pay on a per-user basis, typically by the hour, week or month. The pay-as-you-go model eliminates the capital expense of deploying in-house hardware and software, thus driving the demand for IaaS. 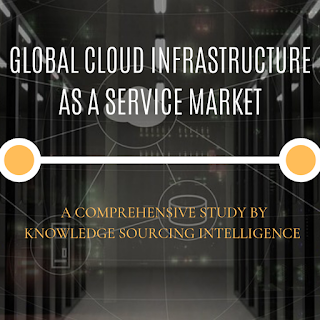 Small and Medium scale enterprises (SME) are increasingly adopting cloud infrastructure as a service (IaaS) as it offers an easy, faster and cost-efficient solution to the business. According to Eurostat, 21% of EU enterprises used cloud computing solutions in 2016. It helps them to avoid the expense and complexity of buying and managing their own servers and other data center infrastructure. It is an effective model for business that has temporary workloads.
Quicker response to shifting business conditions increased stability, reliability, supportability and better security are the major factors that are driving organizations are now moving to cloud.

Global Cloud Infrastructure as a Service (IaaS) Market by Type

By type, the Cloud Infrastructure as a Service market has been segmented as public, private, hybrid and community. Public IaaS holds a significant market share on account of its increased adoption by small scale and medium scale enterprises due to its cost-effectiveness, reliability and high scalability and utility-based billing. Private cloud IaaS is a model where IT services are provisioned over private IT infrastructure for the dedicated use of a single organization. They are preferred by Banking, Insurance, and Government. The Hybrid IaaS model is finding its way in the future as it enables an enterprise to deploy an on-premise private cloud to host sensitive and critical workload and use a third party public cloud provider to host less-critical resources such as testing and development workloads.

The Hybrid Cloud infrastructure as a Service (IaaS) market for distribution is projected to grow at a CAGR of X.XX%, rising from US$XX.XX billion in 2017 to US$XX.XX billion in 2023. Hybrid cloud is gaining traction owing to the increased demand for the more stable, reliable and secure cloud platform. It combines a public cloud and a private cloud by allowing data and applications to be shared between them. It is expected that its adoption will increase in the future because it enables businesses the ability to seamlessly scale their on-premise infrastructure up to the public cloud to handle any overflow- without giving third-party datacenters access to the entirety of their data. This ensures more security as compared with its other counterparts such as public cloud which lead to concerns over bandwidth, latency, and security. we have completed a detailed analysis of all segments of this market in the market research report.

Global Cloud Infrastructure as a Service (IaaS) Market by Geography

By geography, the Cloud Infrastructure as a Service (IaaS) market is segmented as North America, South America, Europe, the Middle East and Africa, and the Asia Pacific. North America holds a significant share of the global cloud IaaS market due to the presence of a large number of data centers across the U.S.A. Stringent regulations regarding data security and privacy are encouraging organizations to opt for cloud IaaS in the region, thus positively impacting market growth. 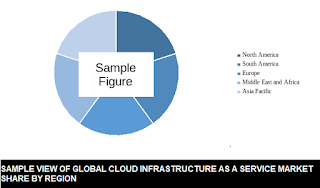