The automotive braking system is projected to grow at a CAGR of XX% to reach US$ XX billion by 2024 from US$ XX billion in 2018. A braking system is an arrangement of combined linkages and components such as brake lines, drums/discs, master cylinder etc. that are arranged in such a manner that converts a running vehicles kinetic energy to heat energy which in turn deaccelerates or stops the running vehicle. 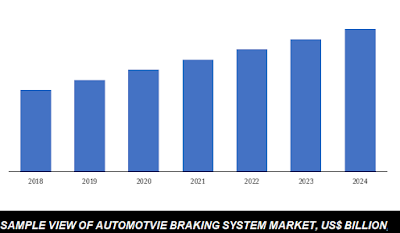 Rapid growing demand for automobiles owing to increase in disposable income is expected to drive the demand for braking systems. Furthermore, the increasing number of road accidents has led the manufacturers to spend heavily in R&D to bring out the state-of-art technology for advanced and safe braking systems which is also expected to anticipate the market growth opportunities during the forecast period.


Impact of Increasing Number of Road Accidents:
In an automobile, a braking system is an arrangement of various components and linkages that are arranged in such a manner which are used to stop or de-accelerate a vehicle. The automotive breaking systems market is expected to have substantial growth over the course of the next five years on account of increasing road safety concerns and an increasing number of road accidents across the globe. The increasing number of road accidents has led the government to implement numerous regulations regarding safety standards for vehicle manufacturers. Moreover, the number of deaths due to road crashes were approximately 1.35 million in 2018 (Source: World Health Organization). The increasing number of road fatalities has to lead the manufacturers of braking systems also to develop new technologies for advanced braking systems.
Furthermore, in 2017, 37,133 people died in motor vehicle crashes in the United States which were tied to human error, the NHTSA (National Highway Traffic Safety Administration) is standing forefront for new and evolving vehicle technologies such as driver assistance systems, which not only keeps the drivers safe but also the pedestrians safe, too. However, the mandatory requirement of the Anti-Lock Braking Systems (AEB), Electronic Stability Control and Pedestrian Automatic Emergency Breaking System in the vehicles across various economies like an initiative by, U.S. Department of Transportation for automobile manufactures is expected to widen up the market growth opportunities during the forecast period.
Automotive Braking System Market by Geography:
By geography, automotive braking system market is segmented as North America, South America, Europe, Middle East and Africa, and Asia Pacific. APAC dominates the automotive braking system market owing to the large automobile manufacturing base in countries like China, India, and Japan. Rising investments in terms of expansion of production facilities and implementation of new and stricter regulations to reduce road accidents will further contribute to the growth of APAC Automotive Braking System market during the forecast period. North America and Europe also witness a significant CAGR on account of stricter regulations and supportive government policies to boost domestic automobile production. 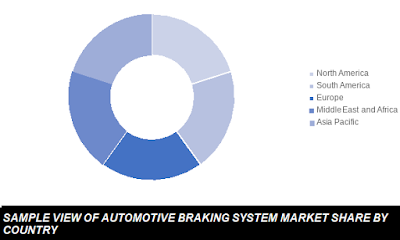 U.S. Automotive Braking System market was valued at US$XX billion in 2018 and is expected to grow at CAGR of XX% over the forecast period to reach a market size of US$XX billion in 2024. Booming automotive manufacturing in the U.S., supported by the presence of major automakers, is the major driver of the country’s automotive braking system market. Stringent government regulations regarding advanced braking systems are expected to drive the market demand for braking systems. For instance, in March 2016, the U.S. Department of Transportation’s National Highway Traffic Safety Administration (NHTSA) and the Insurance Institute for Highway Safety announced to mandate the automatic emergency braking on all new cars from September 1, 2022.
Recent replacement of NAFTA (North American Free Trade Agreement) by USMCA (United States-Mexico-Canada Agreement) will significantly impact the country’s automotive industry which, in turn, will bolster the demand for braking system across the sector, thus positively impacting the growth of the U.S. Automotive Braking System market during the next five years. According to the new agreement, it is mandatory for automakers to manufacture 40% of their motor vehicles in facilities where assembly workers earn minimum US$16 per hour. Since the average wage in Mexico is relatively lower than that the set criteria, it will encourage U.S. automakers, which earlier shifted their production facilities in Mexico due to lower production costs, to shift back to the country.