By vipin - May 13, 2019
Global biometric sensor market is projected to witness a CAGR of 11.49% during the forecast period to reach a market size of US$1,831.088 million by 2023, increasing from US$953.627 million in 2017. A biometric sensor is a transducer which converts a trait of a person into an electrical signal. Applications of biometrics include the use of a high definition camera for facial recognition, use in a microphone for voice recognition, and some are designed for the scanning of patterns under the skin. Fingerprint technology is expected to show a major growth in the coming years due to its utilization in various applications across different end-user industries. Growing instances of frauds across industries such as BFSI and healthcare is driving the demand for biometric applications which, in turn, is fueling the growth of biometric sensor market. 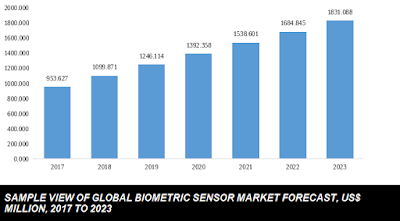 Higher security standards provided by biometric sensor systems over traditional security systems :
The Concept of fingerprint biometrics has been in existence for quite a long time and has been in use by the criminologists for the identification of criminals. Sectors like the government, banking, defense, and other financial institutions are using biometric technologies for activities like border control, national identification cards, voter registration, e-passports and to secure confidential data. In addition to these activities, biometric technologies are used for the efficient management of the workforce in industries by the incorporation of biometrics (finger) in their attendance systems.we have covered all segment of this market  in our market research report.

Global Biometric Sensor Market by Geography:
By geography, global biometric sensor market is segmented as North America, South America, Europe, Middle East and Africa, and Asia Pacific. The North America and European regions accounted for a significant market share in 2017 owing to the continuous developmen of state-of-the art security solutions coupled with high adoption of these sensors. Asia pacific region is projected to witness the fastest regional market growth over the forecast period majorly due to the presence of major market players in the region. Rising smartphone production in China and India is fueling the demand for fingerprint recognition technology, thus positively impacting the growth of biometric sensor market in the region. Expanding digitization in countries like India across different industries is another factor contributing to the overall growth of APAC Biometric Sensor market. Emerging smart home market will further boost the biometric sensor market growth in APAC during the forecast period. 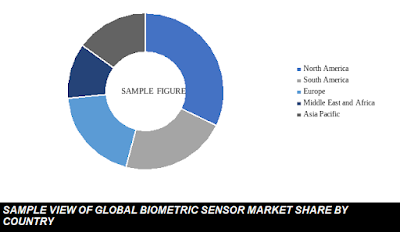 The U.S. biometric sensor market holds a significant share in North America biometric sensor market and is projected to grow at a CAGR of XX.XX%, increasing from US$XX.XX million in 2017 to US$XX.XX million in 2023. Increasing security concerns is one of the driving factors driving the demand for biometric sensors in the country. In the US, government uses biometrics that include iris scanning for TSA screening in airports, facial recognition for the database of FBI and figure prints for prison systems and border management. The U.S Defense and Homeland Security departments have long been using fingerprint and other biometric technologies to facilitate physical and digital access. Moreover, these agencies are increasingly investing in new biometric technologies which support the growth of biometric sensor market in this country. In June 2016, DOD officials announced to replace the Common Access Card for a multifactor authentication solution to eliminate the need for passwords, thus, providing more reliable security. Rising investments by market players to develop advanced and more efficient biometric technologies is projected to propel the growth of U.S. biometric sensor market in the coming years. Recently in August 2018, NEC Corporation has invested in the U.S.-based biometric system company, Tascent, Inc., in order to accelerate the global expansion of its safety business.