By vipin - April 25, 2019
Industrial safety market is projected to expand at a CAGR of 8.13% to reach a market size of US$5.663 billion by 2022, from US$3.831 billion in 2017. Industrial safety is referred to the managing of all the events and operations within an industry to protect its employees and machinery by reducing the hazards, risks, and/or near misses. This is being supervised by the federal, state and local laws and regulations which cover a variety of aspects considering the safety of the industry personnel and equipment in the industry. All industries are required to comply with these rules and regulations in order to carry out safe operations and provide a safe working environment for the workers.
OSHA is a primary regulatory body in the United States and is responsible for maintaining safety within an industrial environment. Similarly, the Ministry of Labour & Employment in India has set certain rules and Acts for maintaining industrial health and safety. This includes the Factories Act, 1948; The Mines Act, 1952; and The Dock Workers (Safety, Health & Welfare) Act, 1986. The imposition of strict regulatory standards for industrial safety is one of the major factors driving the growth of this market. Rising concerns regarding the safety and well-being of the workers across industry verticals will further add to the demand for these solutions. 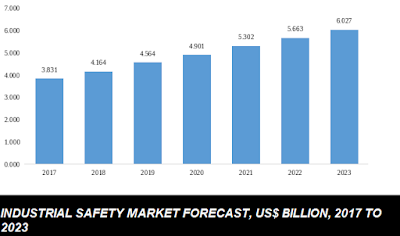 Healthy and safety are important aspects and necessity for the workers of any working environment, and in order to achieve these conditions; the vendors must comply with regulatory standards. Failing to comply with these standards will affect the safety of the workers and negatively impact the company’s image and financials. It is difficult to eradicate the cause of workplace accidents, but the vendors can make arrangements to provide better safety to their workers and reduce the probability of workplace accidents.
Strict Government Regulatory Standards Regarding Industrial Safety :
One of the examples of such federal organization is OSHA, Occupational Safety and Health Administration and is a part of the United States Department of Labor. The OSH Act covers most of the private sector employers and their workers, also some of the public employers and workers in the 50 states and certain territories and jurisdictions falling under the federal authority. The jurisdictions include the District of Columbia, Puerto Rico, the Virgin Islands, American Samoa, Guam, Northern Mariana Islands, Wake Island, Johnston Island, and the Outer Continental Shelf Lands as defined in the Outer Continental Shelf Lands Act. we have covered market research of industrial safety as per government regulatory standard in our report.
Industrial Safety Market By Geography  :
By geography, the industrial safety market has been segmented as Americas, Europe Middle East and Africa (EMEA), and the Asia Pacific. The Americas and EMEA are further bifurcated into the major regions. North America and Europe held a significant market share in 2017 owing to the stringent government regulations regarding workers’ safety, rise in the number of vendors and the trend towards industrial automation across industry verticals. 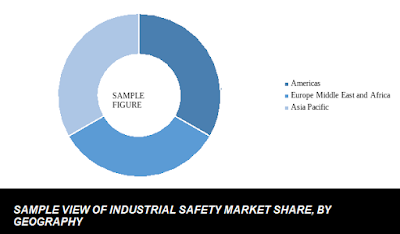 The developing regions such as Asia Pacific and South America are projected to record impressive growth on account of favorable government policies promoting the manufacturing industry, imposition of strict government policies regarding the safety of workers and increasing investments in the research and development of advanced and cost-effective solutions targeting the cost-sensitive consumers in these developing regions in the coming years,.
Request Free Sample or Download Report:
global industrial safety market size
For Automation Industry Coverage:
global industrial safety industry trends