By vipin - April 10, 2019
The global wafer handling robots market is projected to grow at a CAGR of 9.52% during the forecast period of 2017 to 2023. Wafer handling robots are used for multiple purposes including cleaning, stacking aligning, and packaging among others. The demand for wafer handling robots is projected to rise owing to the boom in the demand for silicon wafers across multiple industries. Furthermore, the rising investments in automation will further escalate the demand for these robots.
However, the cyclical nature of the semiconductor industry will pose a major restraint to the market in the long run. Geographically, the Asia Pacific is estimated to hold a substantial share in the market owing to the high semiconductor production in countries such as Taiwan, Japan, and Korea among others. The regional market is further projected to grow at a good CAGR due to the increased investments in the semiconductor industry and favorable government policies amplifying the semiconductor manufacturing in budding economies such as India and China
Growing demand for silicon wafers :
Silicon wafers are thin layers of semiconductor substrate and form a key component in integrated circuits. The boom in the demand for electronic and electrical equipment will be the key reason for the increasing demand for silicon wafers, resulting in an increase in demand for wafer handling robots. Silicon wafers are used in almost all electronic components, with the likes of smartphones, computers, tablets, sensors, solar cells, and more. Furthermore, increasing automation and use of electronics across industry verticals has also resulted in an increase in the demand for silicon wafers. Moreover, advanced components require stacking and placement of silicon wafers at very high accuracy levels and thus necessarily require the use of handling robots, further escalating their demand.we are delivering in depth market research for global wafer handling robots market due to increasing consumption of silicon wafers.
Global Wafer Handling Robots Market By Geography :
By geography, the global wafer handling robots market is segmented as North America, South America, Europe, the Middle East and Africa, and the Asia Pacific. North America and Europe region accounted for a significant market share in 2017 owing to early and high adoption of advanced technologies for enhancing the production processes. Asia Pacific region is projected to witness impressive growth over the forecast period. The developing economies in the region such as China, India are transforming themselves into manufacturing hubs which creates ample opportunities for global market players to expand their presence in APAC region. Moreover, increasing investments in research and development and favorable government policies is also expected to drive the growth of the market during the forecast period. 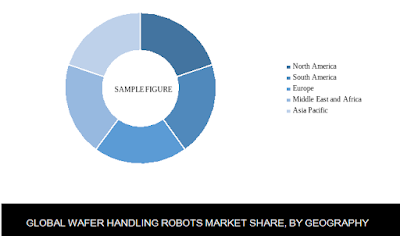 In addition, a high level of insurance penetration owing to the high level of awareness and the stringent of government regulations regarding insurance coverage for the residents will further add to the growing demand for these devices. However, stringent government regulations pertaining to the approval of newly developed devices will restrict the growing demand for these devices in the country over the forecast period.
Request Free Sample Or Download Report :
global wafer handling robots market size
For Our Semiconductor Industry Coverage :
global wafer handling robots industry trends