By vipin - April 09, 2019
The anesthesia and respiratory devices market is projected to grow at a CAGR of 8.16% during the forecast period, to reach a market size of US$30.063 billion in 2023, from US$20.311 billion in 2017. Due to the increasing prevalence of respiratory diseases and the rising number of surgical procedures, the market for anesthesia and respiratory devices is projected to witness a decent growth during the forecast period.
The demand for these devices will also surge during the forecast period owing to the rising elderly population and the increasing number of accidents and chronic diseases worldwide. However, the stringent regulations regarding the manufacturing and usage of these devices will hinder the market growth in the coming years. The North America region holds a substantial share in the market owing to high healthcare expenditure and increasing number of surgical procedures in the region.we provides market research analysis of Anesthesia and Respiratory Devices market with considering all factors.
Anesthesia and Respiratory devices market by Geogrophy :
By geography, the anesthesia and respiratory devices market is segmented as North America, South America, Europe, Middle East and Africa and the Asia Pacific. The developed regions of the world such as North America and Europe held the significant market share in 2017 owing to the rising incidence of lifestyle diseases, increasing number of surgeries and favorable government policies promoting the insurance coverage for a wide range of diseases. The Asia Pacific region will witness impressive growth in the coming years on account of booming healthcare expenditure, improvement in the overall health awareness and various governments implementing universal healthcare coverage in the region. The Middle East and Africa and South American region will witness modest growth over the next five years. 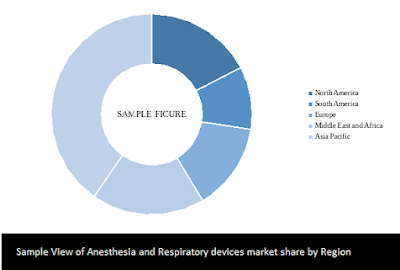 Growing Geriatic Population :
The prevalence of geriatric population has increased around the globe. According to the World Health Organization, between 2015 and 2050, the proportion of the world’s population over the age of 60, will increase from 12% to 22%, with 80% of the older population living in lower- and middle-income countries in 2050. Amongst the old age population, respiratory diseases are a common health condition. An increasing trend is also observed in the deaths amongest the geriatric population due to respiratory diseases. Furthermore, incidences of diseases like asthma and Chronic Obstructive Pulmonary Diseases (COPD) is growing across the world, especially amongest the older population, and is pushing a demand for respiratory devices around the globe.
Furthermore, the geriatric population also suffer from multiple other health issues, such as organ and joint replacements, and more. Cancer is also a leading reason for surgeries amongst the elderly, and the prevalence of cancer is very high amongst them also. According to the National Cancer Institute, the percentage of new cancer cases for the age group 35-44 and 65-74 was 5.2% and 25.4% respectively. This growing demand for surgeries amongst the elderly will be one of the leading reasons for driving the demand for anesthetic devices and would drive the growth of the market in the coming years.